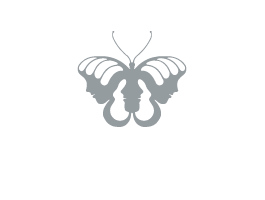 Early History/The Birthplace of the Bahamas

The Lucayan-Arawak Indians were the indigenous people of the Bahamas. They came to the islands in the 8th century from the Greater Antilles.  England later claimed The Bahamas from Spain and in1648, a group of English settlers from Bermuda known as the “Eleutheran Adventurers” established the first settlement in the Bahamas at Cupid’s Cay in 1648, adjacent to Governor’s Harbour.

Today you can experience the same pristine sea-to-sea vistas and blissful natural habitats of yesteryear adventurers at French Leave Eleuthera.

In 1938, Count Alfred de Marigny stated, “the first time I laid eyes on this land, I knew I would buy it”. And so it was, the Count purchased and named the property French Leave.

While living in Nassau in 1943, with his new and younger bride Nancy Oakes, Count Alfred de Marigny was accused of murdering his famous father-in-law, Sir Harry Oakes. Although he was acquitted of the charge, he was deported and had to make his own “French Leave” from the Bahamas.

French Leave Eleuthera is located in the historic seaside settlement of Governor’s Harbour, considered the capital of Eleuthera. As one of the oldest settlement in The Bahamas, you will find an appealing quaintness among heritage homes, sun drenched villas and picturesque historic churches, many over 150 years old.

Stroll along the harbour front and visit Haynes Library (1897) or the site of the first Bahamian Parliament dating back to 1746, enjoy the Friday evening community fish fry, or stop by the Leon Levy Native Plant Preserve on Bank’s Road and learn so much about the islands 1,300 native plant species.

Whether you’re looking for the grocery store, cultural events, local artisans, restaurants, boutiques stores, or even celebrity watching—you’ll find them here without the hustle or the hassle. 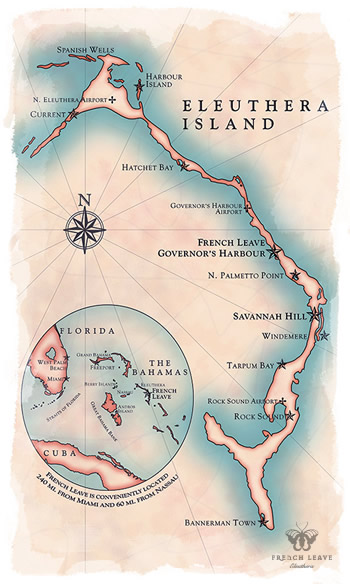 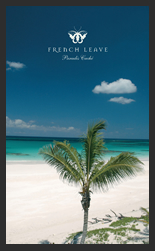